More core! This 7-week series of classes may now be repeated over 90 days as often as you'd like!

This powerful core class series was influenced by familiar yoga, pilates and other fitness methods of exercise, but has redesigned movements from a healthier, safer and more functional approach. Get a core workout that’s 408% more effective than ordinary crunches – and you feel good while doing them! This class is powerful in its effectiveness, but gentle to the body in its approach. Students must purchase a ball prior to starting classes, so it is recommended to have the ball on hand before subscribing to the class series.

To do the class exercises you’ll need a yoga mat and a mini ball that is about 8” diameter when inflated. This is the best affordable ball I’ve found, but you’re welcome to use any ball this size. http://bit.ly/1NbvZVN  This ball is $7.99 and the shipping is free. Try the coupon code FIRST when purchasing and you should get 10% off!

Who should check out 360 Core & Stretch: 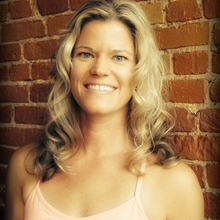 Sara's calming demeanor and concern for her students have made her a natural teacher. She takes a counter-culture approach to fitness and emphasizes the importance of treating our bodies gently and correctly.
Buy $34.99